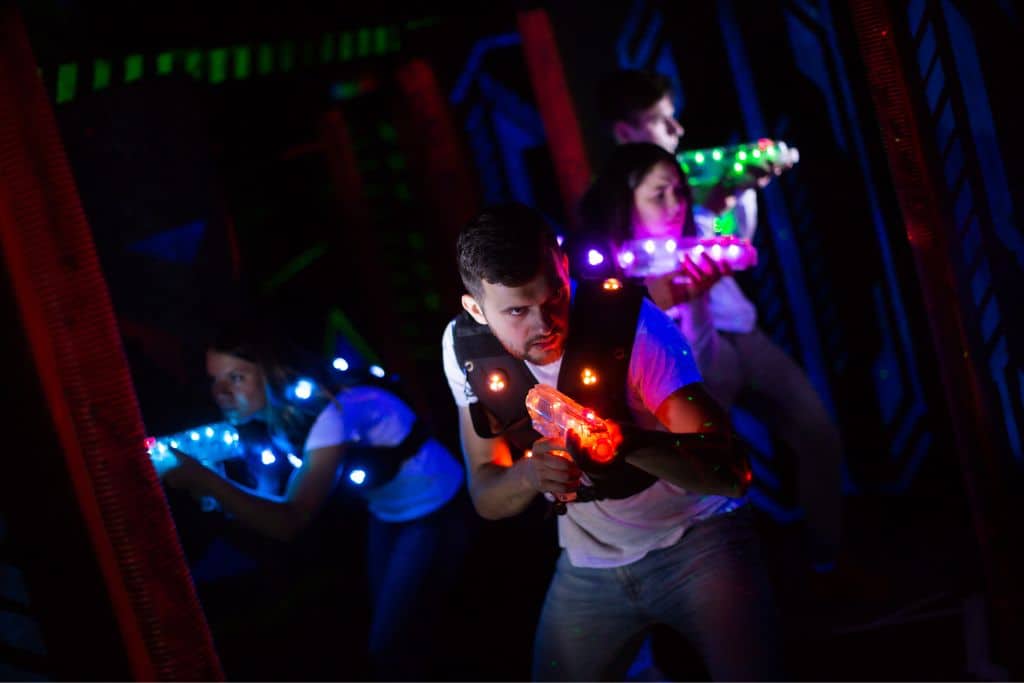 Currently (2022), there are six places in Maine where you can play laser tag. Clicking on one of the names in the list will bring you to information about that place.

Laser tag is a super fun game that can combine elements of sports, war games, and role-playing. It’s a safe way for kids to learn how to cooperate in a team environment in real life instead of just virtually while playing video games!

What Is Laser Tag, Anyway?

Laser tag is a game played with light beams. They are usually made with a laser pointer, which emits light that is reflected by sensors attached to players’ vests. The sensors send signals to a player’s vest that are then converted into sound.

Laser tag is a team sport, and teams compete against each other. Many laser tag facilities also offer laser tag parties, which give players the opportunity to play laser tag with their friends.

✅ G-Force Laser Tag is more than just laser tag. They are an arcade, a restaurant, a laser archery *and* an axe-throwing venue! If you are looking for some crazy excitement, you will definitely find it here.

They can also do mobile laser tag, so if you want the party to come to you, they can do it. One of the things I really like about them is they make it very clear that they can adapt to fit the needs of people of all abilities. As a teacher, I think it’s awesome that they take a strong position on that.

After 10pm it turns into 21+, because they have a Double Super Secret After Party at the venue!

✔️ Address
G-Force Laser Tag at the Bangor Mall on Stillwater Ave, in Bangor, of course!

✔️ Cost
The prices range from $8/person to $150/person for several hours and a variety of different activities. You will definitely find something to suit your needs.

✔️ Players
The prices are per person, and the number of players depends on the venue and reservations.

If you are in Bangor and don’t want to spend all your time playing laser tag, here are some other things to do, some for kids, and a few day trips.

✅ Spare Time Entertainment in Portland offers bowling, an arcade, and laser tag. They offer specials every day of the week. For example, on Wednesdays laser tag is 50% off after noon, and on Mondays from 9pm to 11pm you get unlimited laser tag for $10.

✔️ Hours
Their hours vary from 9am or 10am to 10pm or 1am depending on the day of the week.

✔️ Cost
Laser tag costs $8 per person, but there are daily specials you can check out.

✔️ Players
The number of players depends on how busy they are and on reservations.

Laser tag is an excellent team-building exercise because players must work together to complete challenges. This requires them to communicate with each other and use teamwork to overcome obstacles. It’s a great way to practice these skills.

✅ Family Time Dine and Play in Auburn offers laser tag, along with an arcade, a maze, and bounce houses. You can book a party for laser tag if you have a group that wants to play That is the best way to make sure you get the time slot you want and that there is plenty of space for your players.

You can also book private laser tag for $100/hour for their space-themed laser tag battleground! They also offer family-friendly dining so you can make the most of your day without having to leave for lunch.

✔️ Hours
They are closed Monday and Tuesday, and generally open at noon on the other days of the week.They close at 7pm, except on Sundays when they close at 5pm.

✔️ Players
The number of players varies, but all players must be at least 42″ tall.

Here are some other things to do in the area.

✅ Gorilla Tactics Outdoors Laser Tag in Wiscassett also has a ropes course and zip lines with their co-company Monkey C Monkey Do. Their laser tag arenas are all outdoors, and there are four different arenas to choose from.

They also have four different games you can choose, so you’ll have plenty of options and you can go back several times and have completely different experiences. They require reservations, so you’ll have to plan ahead.

✔️ Hours
Since you have to make reservations, use the calendar on their site to see what hours are available on the date you would like to play laser tag.

✔️ Players
They ask that players be at least 10 years old, but suggest that the arenas are more suitable for older teens, but younger kids can play if they are with older guests.

What Kind Of Games Can You Play With Laser Tag?

There are several different types of laser tag games available. One popular game is capture the flag. In this game, teams compete against one another by capturing flags belonging to opposing teams. Players can choose to play as either the attacker or defender.

✅ Play207 Laser Tag is a really cool option because they offer mobile games–yep, they can come to you! They provide inflatable obstacles that can be placed wherever you plan on holding the game, and they can also create a variety of different games based on how and what you want to play.

Not only can they set up their barriers and bunkers outside, but they can do it in a gym, or apparently even in an office! The game intent and set up of the obstacles can be geared to the ages playing, which is one of the really great features of Play207 Laser Tag.

✔️ Address
Since they are mobile, they will come to you!

✔️ Hours
Same as above–you decide when you want to play and work out the scheduling based on what works for your group.

✔️ Cost
They offer a basic party for 12 for $299, but they also offer recurring monthly packages starting at $169, so if you are part of a group that wants to play on a regular basis, this could be a really great option.

✔️ Players
The basic packages provide gear for up to 12 players.

✅ Blast Party Rentals is another mobile laser tag option in Maine (and NH). They are only available in Southern Maine, but offer good coverage. Their options include renting: guns with a referee; guns, referee, and bunkers; or laser tag equipment only. They will also create a specific type of game for your group, so the options are endless.

They can set up an arena inside or outside (but not on rocks, mulch, or sand), and delivery, set up, and break down are all included in the prices.

Laser Tag/Equipment Only: $349 for up to six hours. This option includes 10 laser guns and four inflatable bunkers that can be used indoors or outdoors.

Laser tag simply means “game of laser beams” and is a popular sport for kids and adults alike. You can play laser tag in any building with the appropriate equipment, but the best games are found at laser tag centers like those listed here, where there are several different types of laser tag rooms available.

It’s also possible to arrange a private laser tag party for a small group of friends or family members at virtually all of the laser tag centers in Maine.

There are currently six places in Maine where you can play this unique team-building sport. Each place offers its own unique take on laser tag, ranging from indoors to outdoors, and simple, fun games for kids to more tactical games for older teens and adults.

Looking For Other Things To Do Indoors In Maine?

Check out this huge list of activities you can do indoors in Maine.

We are almost full-time travelers now, although we still call Maine home. We started teaching English online so we could travel and I could walk in as many bodies of water as possible around the globe. Learn more about us and how we do this on our About Us page. Learn how you can do the same on our Resources page.

Are There Wolves in Maine?